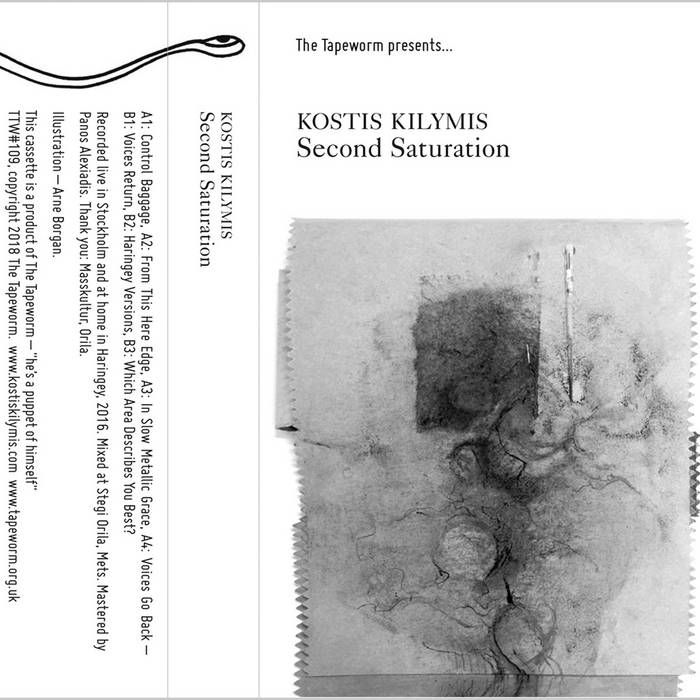 A1: Control Baggage
A2: From This Here Edge
A3: In Slow Metallic Grace
A4: Voices Go Back
B1: Voices Return
B2: Haringey Versions
B3: Which Area Describes You Best?


“Following up on Arctic Saturation, this is a “live” record of sorts, its mood and good chunk of material captured live at a gig in Stockholm brilliantly organised by Masskultur Stockholm – they brought in a quad PA, and after the gig I traded one of my 7”s for a drink. The rest is me in a little lonely room overlooking the garden in Haringey trying to do dub ambient field recordings on the B-side. It’s all quite languid but slippery, vague tonal ebbs weave through the field recordings. Never really settles on anything obvious, rather pulls you into its own hole of spiralling echoes – did I already mention the word moody? It features some of my most cherished sound captures, the seagulls of Gothenburg and a young soprano practicing next door, not to mention a gratuitous amount of audible delay effects. And anyway, just when you think it might stay in the zone forever, it all gets dry and matter-of-fact and checks out… I took the files and mixed them at the house of ORILA during the hottest week I’ve ever come across in in Athens, stuck indoors and treating the music as my lifeline. Properly sat on the results, almost forgetting about them in one of those aimless periods that you begin by thinking you'll have it all sorted by November, but two years down the line you’re in a different town in another tiny room not sure where the plot is anymore, yet all of a sudden you realise there’s nothing actually to achieve or realise, just you should let things go and move on. Panos Alexiadis was then kind enough to master it. Hope you enjoy this.” – Kostis Kilymis, Bristol, 4.x.2018.

Kostis Kilymis is a Bristol-based artist. He performs electronic and noise music based on live synthesis, rhythm and found sound. His work focuses on immersive environments, feedback systems and the notion of representation. He has been an improviser, performer and collaborator – his encounters including Lucio Capece, Nikos Veliotis, Greg Pope, Leif Elggren, Sarah Hughes, Stephen Cornford and Phil Julian amongst others. He has published work on labels such as Rekem, I Dischi del Barone, Strange Rules and Coherent States.

Recorded live in Stockholm and at home in Haringey, 2016. Mixed at Stegi Orila, Mets. Mastered by Panos Alexiadis.