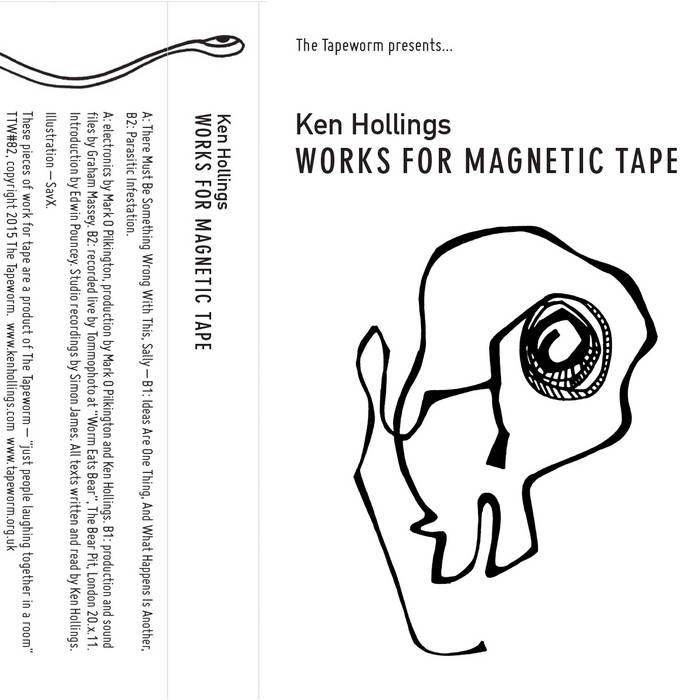 Track listing:
A: There Must Be Something Wrong With This, Sally
B1: Ideas Are One Thing, And What Happens Is Another
B2: Parasitic Infestation

Ken Hollings is a writer based in London. He is the author of the books “Destroy All Monsters” (Marion Boyars), “Welcome to Mars” and “The Bright Labyrinth” (both available from Strange Attractor Press); and his work has appeared in numerous journals, catalogues and anthologies. He has written and presented critically acclaimed programmes for BBC Radio 3, Radio 4, NPS in Holland, ABC Australia and Resonance 104.4 FM; and has given readings, lectures and presentations at such venues as the Royal Institution, the British Library, Tate Britain, Wellcome Institute, the Institute of Contemporary Arts, the Berlin Akademie der Künste and the Venice Biennale. For more information please go to kenhollings.blogspot.com or follow @hollingsville.

Ken Hollings writes: “I have always been, first and foremost, a writer. The three tracks that make up this audiocassette release reflect my interest in how differently the written text operates from spoken word: what separates and makes them distinct from each other – and what happens when one is translated into the other?

A longer version of the text for “There Must Be Something Wrong With This, Sally” appeared in volume 19 issue 4 of the Leonardo Electronic Almanac: “Without Sin: Freedom and Taboo in Digital Media”. It, in turn, is a reworking and expansion of some of the themes that occur in my book “The Bright Labyrinth: Sex, Death and Design in Digital Regime” (Strange Attractor Press, 2014). These particular themes and their development were occasioned by my fascination with a homemade record, identified on the label only as ‘Sal Boo’, featuring two slightly drunk women trying to get the recording device to work properly. This piece of mechanized circular madness remains for me one of the most remarkable recordings ever made – I still listen repeatedly to ‘Sal Boo’ and find new things in it each time. You can download a PDF of my original essay by clicking here. The reading is in several sections, with electronic backgrounds and interludes supplied by Mark O. Pilkington, to whom I am indebted for his patience and care in the final production of this piece.

“Ideas Are One Thing, And What Happens Is Another” was commissioned in 2012 to be read as part of a performance to celebrate the centenary of John Cage’s birth. Subtitled “A Neatly Ordered Sequence of Texts”, its ten parts contain personal memories of the time I spent with Cage working on one of his books, together with thoughts on what constitutes ‘an idea’. The actual title is a line from Cage’s 1961 lecture “Where Are We Going? And What Are We Doing?”. At my request, Graham Massey supplied the backgrounds for this reading: the sounds of a needle stuck in the runoff grooves of various records of his choice – the one brief moment of ‘silence’ certain to be on every release. Graham also very kindly agreed to do the final mix and edit of the track, making its basic components sound more elegant and informal than I could have managed on my own.

The readings for both of these tracks were recorded by Simon James of the Simonsound at the old BBC radio studios in Brighton. This cramped and darkened space might seem too small to be haunted; but the old green baize-covered desk set up with a mike and lectern, together with the thick glass screen separating it from the control room, were definitely speaking from another age. Much more up-to-date was the language school located immediately above where I was sitting; as a result we had to pause frequently as students clattered up and down the stairwell just on the other side of the studio wall. Simon did a fantastic job of editing the various takes together into a smooth whole.

“Parasitic Infestation” was originally written as an introduction to “The Art of Worms”, The Bookworm’s debut publication documenting the cover art for The Tapeworm’s first 25 audiocassette releases. The book was launched at a special event, “Worm Eats Bear”, on 20 October 2011 at the Bear Pit in London, where this reading of the essay took place. I love the raw immediacy of the recording and am very happy to include the track as it is – in memory of a remarkable evening. “The Art of Worms” is currently out of print, but you can find the complete text by clicking here.

I decided to call this collection “Works For Magnetic Tape” primarily for nostalgic reasons. When, as a teenager, I first started exploring avant-garde music, I quickly discovered that listings on albums or in catalogues of any composer’s ‘works for magnetic tape’ – as opposed to those for string quartet or piano trio – usually contained the weirdest and most interesting stuff to my untrained sensibilities. It is a shame that the category appears to have fallen out of favour. The title also refers directly to the audiocassette medium itself and is an expression of my pleasure in contributing to The Tapeworm’s grand designs.” – Ken Hollings. London, 25th July 2015

Guests include Kassa Overall and Muriel Grossman, plus an LP of the week by Van Hunt.